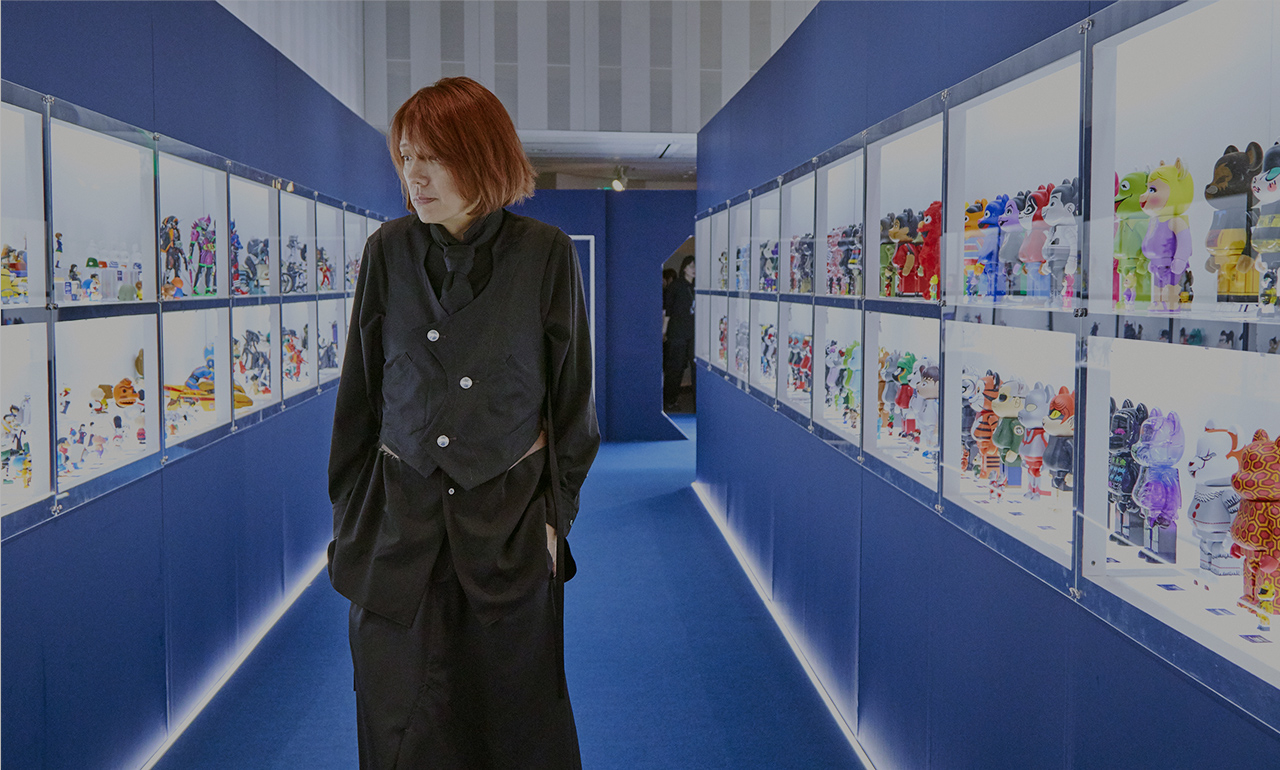 As we enter the new Reiwa Era, we interviewed MEDICOM TOY CEO Tatsuhiko Akashi, the spark that ignited the scene, about this exhibition and the secret to MEDICOM TOY's popularity.

MEDICOM TOY CEO Tatsuhiko Akashi:​ ​First, there was the Star Wars archive. Next, I think you can see how our MEDICOM TOY product group is diversifying. In particular, we've received many offers from various channels over the past one or two years, and have teamed up with parties we never imagined before.

---- For example, who are your partners?

Akashi:​ ​For example, there is the Post Office and others. By making unusual combinations, point by point, we seek to create new contents, software, and distributions. That's why we have something like a sneak preview. It's a secret, so I can't say who was there (laughing), but there may have been some well-known people. We will be making an announcement in a few months.

---- Can you tell me a bit more about the concepts incorporated in the keywords for this exhibition: "toys", "figures", "art", "beyond genre", "without borders", "worldwide", "excitement", "anticipation, "resonance, and "inspiration".

Akashi:​ ​Whether the characters loved by every Japanese, such as Crayon Shin-chan and Doraemon, or are by an artist who is still unknown, we fill all our products with the same quality of love. There is no difference. The only difference is the customer. I honestly feel that our passion, the direction (of our products), and our concept have not changed much as can be seen in the keywords. It goes without saying, but no matter what we make, it is "Made by MEDICOM TOY". We want people who only know Crayon Shin-chan to also discover the qualities of artists who are less well known, and the opposite as well.

---- When you say that your product group is diversifying, do you mean that the range of your characters is expanding?

For example, small Doraemon figures are available at almost any store, but our big hit id "Sculptor Doraemon", which is only available at The Doraemon Exhibition (in Tokyo in 2017 and in Osaka in 2019) and at our company stores. From our concept that considers product characteristics and direction in this way, exhibiting in this marketing area is the happiest as contents, giving vendors a choice.

Akashi:​ ​When we started the company, we were not thinking about being so closely connected with contemporary art. I think that the starting point was when we received requests to create some figures from a number of clothing manufacturers in Harajuku. Then we worked with Santa Inoue on products called "Tokyo Tribe". Those figures were clothed with "A Bathing Ape®" T-shirt when we started to gain attention on the street.

From that, came KAWS. KAWS became so famous that he is called the Andy Warhol of the contemporary art world. The figures jointly created with him were not seen as toys or art pieces and commanded unbelievable bids at Sotheby's. There's not the impression that we approached contemporary art, nor that we dislike art either. The current state is perfectly natural.

When looking ahead, if you consider the products that we have announced, I think that there are also some that will make you think "why are they planning to do something so strange?" However, now we are approached by art museums overseas and I think that the items we make have gained a certain reputation. This is without pretense. It's the thinking that "our products are not toys, but art". I think that toys are fine as toys.

Akashi:​ ​For these past 23 years, we really have only made things that we like. We don't think about copyrighting these products and making money worldwide, and we don't think we have to do that. On the contrary, we aim to create the kind of product that opens new doors, because we make things that only we can. We're happy if this turns the heads of people who up to now were not interest (in our contents).

---- What are your creative roots?

Akashi:​ ​For me, it was the New Wave era of the 80s. It's like the feeling of being cool, pretentious. I also like the fashions and culture from that era. We do a lot of work with brand names and designers who are influenced by the culture of that era. In fact, our current headquarters building was actually the Nicole brand building owned by Mitsuhiro Matsuda (who led the DC boom in the 1980s). That may have been one reason why we purchased this building.

---- Sacai, who collaborated with you on BE@RBRICK at this time, and Hiroshi Fujiwara of Fragment Design, Daft Punk, and others, are also heavily colored by the 80s culture.

Akashi:​ ​It is interesting that New Age creators in their late 20s or early 30s who are influenced by 80s New Wave have appeared. I personally like their fashion. In Tokyo, there is Salvum and Bed J.W. Ford. I can imagine Steve Strange of Visage wearing these. But even though I say that, nobody knows (laughs).

---- I understand. This is the era of Wag Club and Blitz Club in London, right? Is MEDICOM TOY's creativity influenced by fashion too?

Akashi:​ ​Yes. We are greatly influenced by fashion. If you look at the brands and apparel companies that have survived from the 80s, such as Comme des Garçons, the Issey Miyake group, and the Jun group, I think we can see the words of Darwin, "it is not the strong or the smart who survive, but those who continue to change." We want to be the same.

---- I heard your hometown is Shibuya and that you often went to Kiddy Land as a child. Is that true?

Akashi:I changed schools many times, but I went to primary school in Sendagaya. At the time, Laforet Harajuku was a church. When I was a child, the sisters looked scary, so I remember it well. That's why I feel my hometown is Shibuya Ward, where Omotesando Hills is. I loved Kiddy Land. It seemed like I went there every day. At the time, my grandfather had a pet Japanese macaque and we would bring the macaque along. Really. He also had a pet Japanese giant salamander that always escaped. I would search up and down the sidewalks of Sendagaya to find it. Those were peaceful times.

---- Please tell us about your roots that led to you establish MEDICOM TOY.

Akashi:​ ​As I was collecting toys from America, I started to want to create items that I wanted myself. I collected toys since my primary school days but became serious when I was head hunted to be an executive at an IT venture company in my early twenties. The pay was good, but I had no free time. I vented my frustrations by buying toys. Then the notion to make toys myself began to grow.

---- When you started the company, what kind of future did you envision?

Akashi:​ ​I had no idea. The results were like an improvisation by a jazz musician. It's like a jazz session that slowly unfolds as the music changes depending on the instruments and the musicians, even changing the melody and rhythm. It is not the words of the Snoopy cartoonist Charles M. Schultz, but we are in the state where "we can only win with the cards we have been dealt". We always try to win using as many cards as I have. The same is true for the next 10 years. I honestly do not know what will happen in the future.

----Are there any products that you have sold up till now which stick in your mind?

Akashi:​ ​For 5 years starting in 2006, an exhibition of fashion brands was held, At the finale of the Chanel show Karl Lagerfeld wore a jacket that I designed. That was a big surprise. It was part of the First Season collection. At the exhibition, only three jackets themselves were ordered. Of those three jackets, one was bought by Sara of Colette and another by Karl. It seems like he was attracted by the fashion. Those who understand, understand.

Akashi:​ ​(One reason why we don't promote apparel so much is that) maybe we have more freedom as a toy maker. I am not comparing making toys with any other industry or business, but actually, toys are inexpensive and easy, and the culmination many different raw materials. Because we make our products by factorization, such as how many lots of plastic or resin or wood can be sold for how much money, we don't want to stray from that position.

---- How do you find and contact those with whom you want to start a new work?

Akashi:​ ​In many cases, I look at their homepage, then email them. There are many, many cases where we know them, but they don't know us. The Jackson Pollock Studio and Anne-Valerie Dupond displays at this time were like that. We send a message like, "we would you like to do something together." If they are interested, they reply. If not, they don't. In that sense, the world is pleasantly getting smaller. Of course, we also get requests from overseas. A lot are young artists in New York. They say they want to become known on the streets through MEDICOM TOY. It's nice to get out in the world together and if we are interested, we join with them.

Many people are surprised, but every time we go to Design Fiesta held twice a year, we visit all booths, roughly 5,000 of them. Every year, one or two unbelievably talented people show up. Among the young artists with whom I keep in touch and make something together, some were unknown up to a year ago, but then our product came out and we sell 100,000. Through social media, there is a chemical reaction between the untapped potential of the artist and the passionate commune-like presence that supports them, resulting in new products and contents. It is really fun to watch this expand. The artist asks the world about his talent in which he believes, and answers by producing a product, and the market responds. We can't help it. This is too much fun. Kaori Hinata, whose character named Morris is on display at this time, is one of the artists we found this way. In the past year or so, she has become completely famous and is also receiving offers to create products from overseas now.

Akashi:​ ​Hmm. Good question. Hmm, what would it be... I am already doing everything that I can think of that I want to do. I get about 1,000 emails per day, but I try to answer them that same day. Because if I don't, there's another 1,000 emails arriving the next day. The well-known words of Osamu Tezuka, "You have to do what's interesting to you". I carry out those words as if I were his son.

Tatsuhiko Akashi (President of MEDICOM TOY Corporation) is from Tokyo. In 1996, he founded MEDICOM TOY Corporation. He designs and produces characters and figures from special effects, anime, comics, movies, etc. In 2000, the company released its original block type figure "Kubrick", and in 2001, released the block type bear figure BE@RBRICK. Collaboration with Japanese and overseas artists, brands, companies, etc. Development of multifaceted businesses, such as apparel and interior items.
​