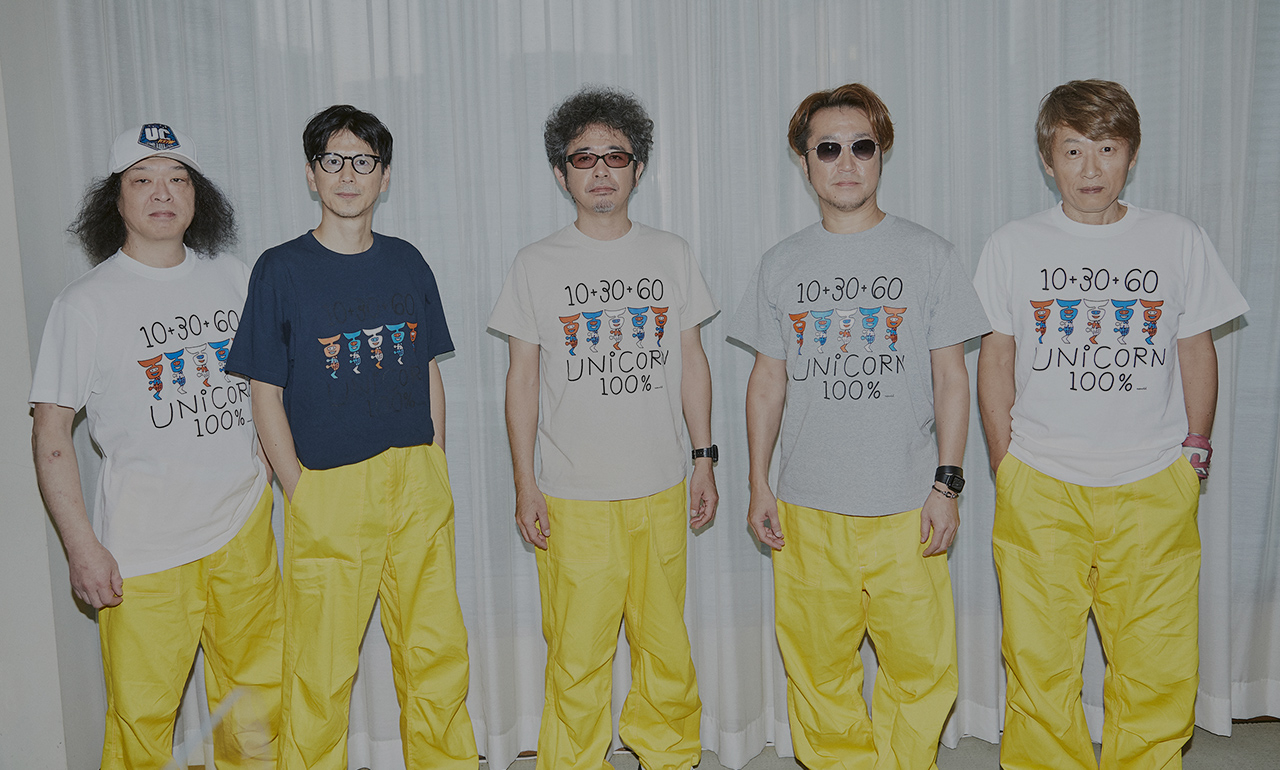 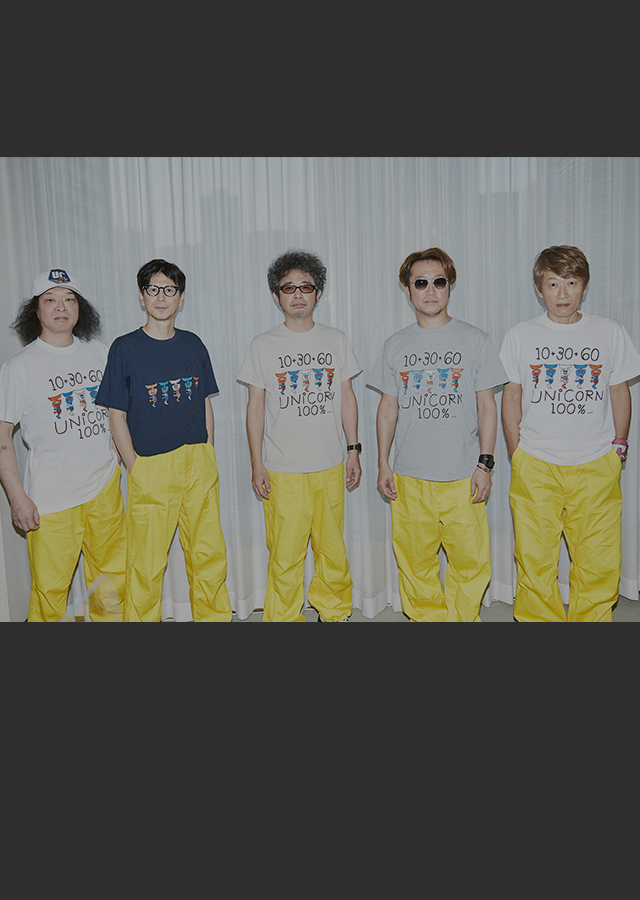 Unicorn looks back on the &quot;100th anniversary&quot; together. For the band&#39;s first exhibition as a summary

In 2019, under the slogan of &quot;work style reform&quot;, the rock band Unicorn ran through the memorial year with the theme of &quot;100th anniversary&quot;. Their first exhibition, &quot;Unicorn 100th Anniversary Exhibition-Hyakka Gotoku-&quot; will be held at OMOTESANDO HILLS Main Building Public holidays), 2020. Will be done.

A corner displaying selected works from the huge collection of photographer Kenji Miura, who continues to chase unicorns, a number of items related to the album &quot;Hattori&quot;, musical instruments actually used by members, stage costumes, etc. Furthermore, the &quot;100th Anniversary&quot; of the unicorn that emerges three-dimensionally through various exhibits such as valuable images and sound sources that can only be experienced here. We asked all the members of the unicorn to look back on the angry days of 2019.

---- This time, the band&#39;s first exhibition &quot;Unicorn 100th Anniversary Exhibition-Hyakka Gotoku-&quot; will be held at OMOTESANDO HILLS What kind of exhibition is this?

Since we are singing &quot;100th Anniversary&quot;, we have the opportunity to see not only live performances but also the history of unicorns, things related to the album &quot;Hattori&quot;, stage costumes, and so on. I wish I had it. That&#39;s why this project was born and I was starting to prepare various things, but with the trend of the new corona, various things changed.

Kawanishi:Originally, I was thinking of starting with Yamagata. Just this spring, a unicorn live was organized in Yamagata, so I decided to hold it accordingly.

ABEDON:I was planning to do the first one-man operation for a unicorn this year on April 30th and May 1st at the &quot;Yamagin Prefectural Hall&quot; in Yamagata Prefecture, where I am from, and that is the new Corona. I couldn&#39;t do it because of the influence of.

Kawanishi:However, I was talking about wanting to do something about that exhibition. If it were an exhibition, it wouldn&#39;t be so dense.

ABEDON:I had been looking for a chance for a long time, but then I was told that I could do OMOTESANDO HILLS So this time, it feels like the event has been officially decided.

---- So that&#39;s it. It was a lot of meetings that led to this event. By the way, how about a place called Omotesando?

Okuda:(Lol). So where do you look good on us?

Kawanishi:After all, isn&#39;t it around Hachioji?

---- The unicorn has a rather urban image, though.

Teshima:Then, is it around Kawasaki?

ABEDON:Oh, that&#39;s right! It&#39;s also an exhibition that looks back on the history of unicorns, which is just right.

EBI:Last year, it was just the same 100th anniversary as us (laughs). Was it a year late?

Teshima:We are 101 years old this year.

---- As you can see in this exhibition, Unicorn was really energetic last year with the theme of &quot;100th Anniversary&quot;, a national tour of all 50 performances, and the release of 2 original albums and 1 single. We developed activities in.

Kawanishi:As for the tour, I spent quite a long time doing a good number of them, but it was a lot of fun. It feels like it&#39;s over in a blink of an eye. I also performed at the &quot;Kure Credit Bank Hall (Kure City Cultural Hall)&quot; in Kure City, Hiroshima Prefecture, but in fact, Mr. Teshima from Kure City is a special envoy for tourism in Kure City.

Kawanishi:Well, I am too (laughs). Personally, I was very happy to be able to perform a unicorn live for the first time there.

Teshima:Having said that, by going to Nara Prefecture on last year&#39;s tour, Unicorn achieved live performances in all prefectures. I think this was a big thing in the history of unicorns.

Kawanishi:Also, Yamagata, which I went to in November, was the last one in that hall.

Kawanishi:It closed last year, but at the end we had a live performance. It was also very emotional, wasn&#39;t it?

ABEDON:You were very busy last year, weren&#39;t you? To that end, I had been preparing for a long time. Everyone thinks about what to do to do such a long tour.

To that end, I thought the new album was absolutely essential. Fortunately, it was expected that a good number of songs could be recorded, so I was able to prepare for releasing two albums a year, including the production period. In that way, not only our members but also the staff were actually preparing for a long time.

So, I was thinking of taking it a little slower this year, but then I ended up in this situation. Even if I took a rest, I was in a situation where I couldn&#39;t live in the first place.

It was also possible to have an album recording period between tours. So last year, both live performances and productions were extremely fulfilling. Really, it passed in no time. Compared to that, this year, not only us, but the whole world has become like this, so I&#39;m glad that we were able to perform so grandly last year.

Okuda:I think what was amazing about this 100th anniversary tour was that we set a limit of 100 minutes per performance. That was a really groundbreaking idea, and the result was perfect. At first, I think the customers thought, &quot;Isn&#39;t it a little unsatisfactory?&quot;, But when I tried it, it didn&#39;t happen. It only takes 100 minutes, so I think I&#39;ll do it properly.

EBI:There was no place to mess around.

Kawanishi:When I did a drum solo once, the members got very angry (laughs).

Okuda:Anyway, I think this was a great idea. 100 minutes is just the right time, and after the live, everyone goes out to eat and drink. When I measured that time, it was 100 minutes.

Kawanishi:Well, after that, I&#39;m starting to get a little bored. I repeat the same story (laughs).

ABEDON:It&#39;s a &quot;new lifestyle&quot; (laughs). It is said that he adopted it a little earlier.

---- If the time is fixed from the beginning, the viewer will also concentrate on watching.

Okuda:That&#39;s right. The audience isn&#39;t messing around, and you can make plans after the live. Customers can also make reservations for meals after the live performance. No matter who says what, the unicorn will go with this.

Kawanishi:Regarding live performances, I think I&#39;ll do it someday, but I still don&#39;t know how to do it. Even though we don&#39;t have live shows, we can watch our live shows on DVD, so I hope you can look forward to seeing them again.

EBI:First of all, there is this exhibition, so I would like you to come and see it. We have released a lot of videos and songs, and we also have solos for each, so I hope you will take this opportunity to review and listen again and expect future unicorns.

Teshima:As for unicorns, I have no choice but to follow the guidelines of the Ministry of Health, Labor and Welfare ... Well, I personally work alone.

Okuda:No, let&#39;s follow the guidelines even when we are alone (laughs).

Teshima:I will obey. But, basically, rock isn&#39;t something someone asks you to do. We do it because we want to do it. That&#39;s why I think that the time when such feelings will match among the five people will surely come out soon. If that happens, we will be fast.

ABEDON:That&#39;s right, Mr. Okuda became a YouTuber during this period. YouTuber in the unicorn world (laughs).

---- That&#39;s right. Mr. Okuda personally continued to upload videos on YouTube one after another even during the self-restraint period.

Okuda:After trying it, I realized that I couldn&#39;t eat this alone (laughs).
But, well, for the times these days, the timing will probably come when this is all right. If that happens, you can just shake the big guys and do a live performance, and you have to think about things that you can&#39;t do until then. Isn&#39;t it a unicorn&#39;s art style to see how interesting it is to take advantage of such a situation? I would like you to see such a place as well.

ABEDON:I think our fans know a lot. Probably no one would say why they wouldn&#39;t play live in this situation.

ABEDON:That&#39;s a great pleasure, isn&#39;t it? So now, what we have to keep in mind is to learn a lot about digital relations so that we can reach those new people properly ... Take this opportunity to learn it and get more power. I hope I can do various things in the improved form.